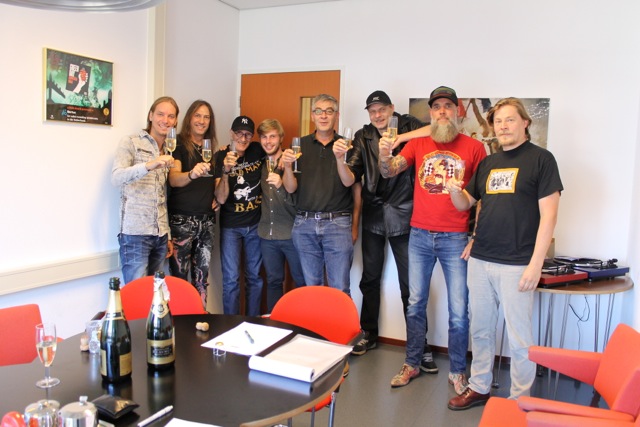 New album “Heaven and Beyond” will be released on February 10

Heavy guitars, a thundering rhythm section, smooth synths and melodic vocals, this is the trademark of the Dutch group Knight Area. Presented as both challenging and compact songs, this has already brought the band international success.

Founded in 2004 by keyboard player/composer Gerben Klazinga, Knight Area has grown to be a familiar name in symphonic and (neo-)progressive rock by releasing successful albums and playing live worldwide. On previous albums, the band has cooperated with a.o. Arjen Lucassen (Ayreon, Star One, The Gentle Storm) and Charlotte Wessels (Delain), and since the arrival of guitarist Mark Bogert and bassist Peter Vink (Q65, Finch, Ayreon) a close line-up has been formed. And an impressive one! Both on the album as on stage the band is not afraid to show off their technical skills, however always in a functional way.

After having released multiple albums on the reputed American label The Laser’s Edge, the band has now chosen to remain closer to home. The successor to  the previous album “Hyperdrive”, which was mixed by Joost van den Broek (Epica, After Forerver, Wende Snijders), will be entitled “Heaven and Beyond”, and will be released next year on February 10th by Butler Records (Lamb, Anneke van Giersbergen, Ruben Hoeke Band, Donnerwetter), the record label subsidiary of Bertus Distribution.

The album release will be celebrated with a release party on February 11th in De Boerderij, Zoetermeer (NL).